Kyoshi Larry L. Mabson holds the rank of Hachidan (8th Degree) and is the senior student of 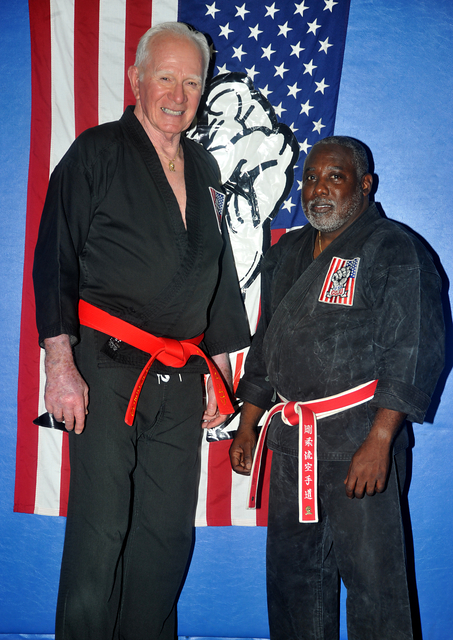 USA Goju Organization (USAGO), an internationally recognized system. Sensei Mabson is honored with holding the highest rank ever received within USAGO and, at the pleasure of Hanshi Liquori, serves as the Senior Advisor and Policy Maker; and successor to the USA Goju Organization. Sensei Mabson is the founder and head of the Mabson-do Goju Kan Karate Association and founder of the

Martial Arts Foundation International. His main location for conducting classes is at the Fort Lauderdale USA Goju Ryu Karate-do Dojo in South Florida.
Sensei Mabson started his formal karate training in Orlando, Florida under Sensei Dave Swanson -- a top student of Master Liquori.  In 1973 he was given the responsibility of developing the Westside Dojo Summer Karate Program. On May 27, 1974 he received his Shodan Certificate (1st degree) from Grand Master Peter Urban and Master William A. Liquori. Thereafter, Sensei Mabson became a co-instructor with friend and class mate, Sensei Stanley Hill-Robinson, at Orlando, Florida's Southwest Boy's Club where he instructed a class of (65) students or more.  In September 1977 he received the rank of Nidan (2nd degree) and was recognized as the lead instructor of the Bethune-Cookman College Karate Club of Daytona Beach, Florida.  In December 1980 after graduating college Mabson relocated to Fort Lauderdale, Florida to continue his employment with the Florida Probation and Parole Services. As an associate instructor of then lead instructor Sensei Joe Lofoco, 4th degree Mabson taught karate classes in the a number of cites in Broward County Florida.  May 1983 Mabson received the rank of Sandan (3rd degree) while continuing to instruct classes at Broward County's Dillard High School, Hallandale Adult & Middle School, Bair Middle School, Lauderdale Manors Park, Sunland Park, Warfield Park and many others.  He has been recognized by the AAU, USAKF, FBBA and FAME as a top state, regional and national kata and kumite chamption and competitor, respectively.  In 1992 Mabson retired from competition as the United States Karate Federation (USAKF) Florida State Kumite Champion; United States Southern Regional Champion; Member of the USAKF Team Florida, Florida's Sunshine State Games Open Weight Champion; World Union Karate Organizations (WUKO) member and ranked 4th in the nation in USAKF Open Weight Fighting.
Sensei Mabson now focus a great deal of attention on promoting, supporting and creating positive martial art activities for students of all ages and styles.  He is the founder of the Martial Arts Foundation and promoter of the annual MAF Free Martial Arts Tournament, which draws hundreds of competitors of different martial art styles (i.e. Karate, Tae Kwon Do, Jujitsu, Kung Fu, etc.) from Dade, Broward and Palm Beach counties not to mention increased participation from Central Florida, Georgia and Colorado. Mabson is presently teaching with the aid of his black belt students at City of Fort Lauderdale Joseph C. Carter Park f/k/a Sunland Park where he has been located for over 35 years. Since 1974, when he started his Orlando, Florida dojo, he has continually worked with students of all ages. Mabson was the creator, promoter and director of the All Black Belt Master's Cup Karate Tournament and Martial Arts Exposition -- a black belt only competition.  He is a recipient of the 1995 Florida Hall of Fame; 1996 Martial Arts Congress Memorial Hall of Fame; founding member of the World Brotherhood of Martial Arts; and founding member of RAM Martial Arts Events. He is considered by many as having  great relationships and influence with other martial arts instructors and students of different styles. Some of his Accomplishments include: